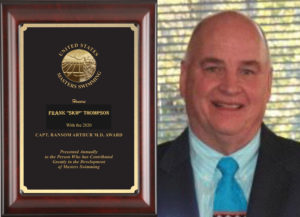 The coveted RJA Award annually goes to a volunteer who has done the most to further the objectives of Masters Swimming and has been awarded since 1973.

“This is the most important award I have ever received in my life,” Thompson says. “It spans almost 40 years of me being a member, competitive swimmer, coach, volunteer, event host, officer both nationally and locally. The people that I have met through the years are like family to me, and there are many like me that have over 40 years in this organization. I will cherish this for the rest of my life and will keep on supporting the organization as long as I am breathing and living on earth.”

The award is usually given at USMS’s Spring Nationals, which were canceled this year because of the COVID-19 pandemic. Instead, Thompson learned of his receiving the award on a Zoom call with several past recipients and friends.

After joining the organization in 1982, he began volunteering the next year as an LMSC club representative and then an LMSC treasurer. Thompson then served at the national level on the Championship, Zone, Planning, Coaches, Rules, and Legislation Committees and currently is the chair of the History and Archives Committee.

Perhaps his biggest impact has come on the LMSC level, at which he’s served for his nearly 40 years in Masters swimming.

“Skip’s contributions and accomplishments are numerous, but what is so impressive is that he has never faltered in his support of USMS programs at all levels,” Oregon Masters member Sandi Rousseau wrote in her letter of endorsement for Thompson. “Skip is truly an ambassador for our sport and has the best interests of USMS in his heart. In all of his contributions over many years, Skip has demonstrated the very essence of what this award recognizes and is a very deserving recipient.”